A Tale of Two Antis

Whose public appearance am I describing below? Have a guess. With shooting making more than the average number of media appearances this month, there are plenty of options:

Speaking to a panel of MPs, they said they would not want to see many forms of shooting banned, including duck shooting. Disagreeing with an RSPB representative on several points, they pushed the need for an evidence-based consensus: “The research that has been done ought to be examined by a group of people who understand it and would then come to a view as to whether more was needed or not.” They went on to claim that licensing moors would not work and that they had the same view of the ‘vicarious liability’ laws introduced for landowners in Scotland.

Who is this controversial figure? None other than shooting’s arch-nemesis, Mark Avery, presenting evidence to the Parliamentary Petitions Committee in defence of his petition to ban driven grouse shooting. The quote is a shameless exercise in cherry-picking, but nonetheless a sign that not even the most polarised debates are as black-and-white as you might think.

Step forward an outspoken defender of grouse shooting to present the alternative view to the same MPs. This speaker understood the nuance to the debate, favouring enforcement of existing laws to a ban: “All legislative tools have not yet been tried and that you should do that first… There is a range of possible options, starting with greater investment in enforcing the laws we already have.” He went on to back a legislative system that would “codify and simply the approach” to shooting sports, and finished with a statement of support from his organisation: “[We do] not want to see an end to shooting. [We do] not want to see an end to grouse shooting.”

Who was that? Oh dear, I’ve done it again – that was Jeff Knott of the RSPB. Another exercise in cherry-picking, but the cherries in this case were low-hanging. The two anti-shooters sang from different hymn sheets when they gave evidence on 18 October: Knott, though certainly not shooting’s biggest fan, was all in favour of working with shoots, and imposing more legislation such as vicarious liability and a licensing scheme if they didn’t comply. Avery, by contrast, adopted a ‘scorched earth’ approach (or should that be ‘burnt moor’?) He argued that, since he couldn’t see measures such as a licensing scheme working, we may as well just skip straight to banning the whole thing. “There would be fewer jobs for gamekeepers,” he admitted. “That is true, but then my grandfather was a coalminer. There are not many jobs for coalminers. Progress is about moving.” That pretty much sums it up. 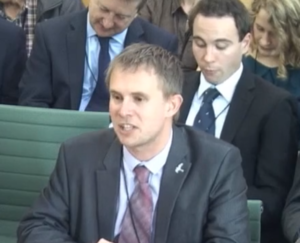 With two high-profile antis going up against Countryside Alliance and Moorland Association spokespeople, you can bet there were going to be some clashes. And there were… between Knott and Avery. Avery took great joy in pointing out a fact Knott had omitted, regarding the intensity of burning across the uplands in Britain. Committee chair Helen Jones met him with a stern reprimand: “I would rather not take point-scoring between witnesses, if you do not mind. Can we stick to the facts?”

“That is not point-scoring,” said Avery, plaintively. “I am saying that the European Commission is investigating the UK Government.” Jones was unmoving: “I will decide what point-scoring is, thank you.”

If there was any pro-vs-anti clashing, it wasn’t between Avery and Stokes, but between Avery and Simon Hart, the Countryside Alliance chairman who sits on the panel. “I wanted to find out what assessment you have made of the alternatives, ecologically and economically,” Hart said. “I am assuming that, because you back the ban, so to speak, those assessments are things that you would have done.” Avery made out that he had an arsenal of economic evidence at his disposal: “There are reports from economists that say the industry figures that suggest an economic benefit from driven grouse shooting are greatly exaggerated. They also do not take into account what an economist would describe as the externalities, which are the costs of increased flood risk and increased cost to water customers from treating water quality.”

But hang on, said Hart, that didn’t actually answer the question: “The question… was not about the people who support grouse shooting. This was about you underpinning your argument in support of a ban. As a basic minimum, would it not be fair to say that a risk assessment or an impact assessment of some sort should have been prepared by you?” Avery had nothing: “I think it is unreasonable to expect an ordinary member of the public to have done a risk assessment that would suit you.” In other words, he’s the former head of the RSPB, the figurehead of a high-profile petition and has access to troves of evidence – until you ask him a question he doesn’t like, at which point he’s just one guy.

With enemies like that, who needs friends? Liam Stokes and Amanda Anderson did their usual sterling job in front of the panel  – but the insight into the ‘other side’ was what made the price of entry worth it. We bemoan the ways in which antis regularly co-ordinate a blast of emotive media stories painting shooting in a bad light – but on this showing, they aren’t actually half as co-ordinated as we think.