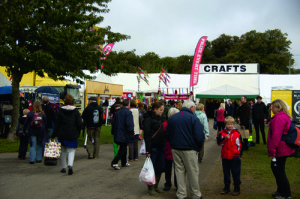 Philip Moss enjoys his first Royal Berkshire and has a promising start to the autumn circuit.

I have recurring dream in which I am a stand-up comedian on the stage of a large theatre and I have forgotten my opening gag. I decide to improvise and shout out: “Are their any completely happy BT customers here tonight? Come on? Where are you?”

In the resulting silence you could hear a fruit fly break wind.  The dream ends with me being shaken awake by a worried looking stage manager who says, “Mr Hitler. You’re on in five.”

Mercifully, I don’t have the money to undergo therapy.

I write this having spent an hour on the phone trying to get through to BT. I get as far as Mumbai and then no further. The line goes dead; I’m left hanging on the line for another ten minutes; I’m subjected to a rather censorious recorded message, which reminds me every three minutes or so how busy BT is. Ironic, really. If they wanted to be less busy they could always improve their services, thereby reducing the number of poorly-paid Mumbaian call-centre workers required to answer what appears to be a large number calls from discontented customers. This experience comes around every year when the steady Monmouthshire drizzle settles in for the long haul to February. It happens, so many engineers tell me, for a variety of reasons:

1. We are at the ‘end of the line’. No truer words were ever spoken.

2. The last half-mile of copper cable was designed and installed by Isembard Kingdom Brunel and is subject to ‘rain ingress’.

3. My telephone line and internet service is of such a profoundly poor quality because I haven’t repented my sins and been ‘saved’. I was especially careful not to make eye contact with this engineer.

But something is different about the start of this autumn. I am not attending the Midland Game Fair. In the absence of any application materials for this event, I have opted for the Royal Berkshire. And what a pleasant surprise. A small and bijou showground just off the M4, which is well laid out and overseen by pleasant, helpful and polite staff. I was shocked to see just how many traders have opted for this event over the years but at the end of the weekend I can see why. I was short of the usual takings at the Midland by only a couple of hundred pounds. The good people in and around Newbury obviously like their shooting and are not scared to put their hand in their pocket to prove the point. I ran out of small cartridge bags and gunslips. The food hall was excellent and they are attempting to build up the Countryside Area as well. With its reasonable pitch fees, this one is a keeper.

The shows leading up to autumn have been generally good. Fenland Country Fair was its usual eccentric and buoyant self with great crowds and lots going on in the ring. It was all change for pitch positions because of layout changes. In the ensuing raffle, my card rose to the surface and I was given about the best pitch on the field, exactly opposite the main entrance. Trade was brisk for the first two days but slightly subdued when the rain set in for the third day. Overall, I think a good show was had by all. The Fenland is popular for its old-fashioned character and easy-going management. Traders are left to sort out problems among themselves.

I noticed at the end of the first day that the Norfolk Cider Stall, presided over by the inimitable Steve Fisher, had moved to just behind my pitch. That evening, tucking into the first of many pints of the excellent ‘bone dry’, Steve told me a rather haunting tale. On the night after he had set up, he noticed a cocker spaniel looking a bit lost. He thought nothing of it and he went to sleep on his trailer, as is his style. He was awoken some hours later by shouting from the far side of the field:

It seems we’ll never know the fate of F**ker the spaniel, or his human counterpart (Photo: Andrea Westmoreland)

The shouting drew closer until the man looking for ‘F**ker’ was just by the Norfolk Cider stand. Being a helpful soul, Steve sat bolt uprate on his trailer and asked, “Are you looking for a cocker spaniel?”

The stranger nearly soiled himself with fright. After he had calmed down, he explained to Steve that he had lost his sixteen-year-old son on the showground. His son’s name is Farquhar. Steve said that he never found whether the man’s quest was successful or not. Perhaps we shall never know.

The following Saturday, I set my tent up at Usk. This is one of the oldest shows still operating and has a great atmosphere. There’s always a good turn-out of livestock which anchors the show to its traditions and it is generally an enjoyable day, even if it hasn’t necessarily been the most profitable. Any shortfall can usually be made up by the Frampton-on-Severn Country Fair the following day. Just when you think that you can rely on shows, they rejoice in turning round and biting you. Business at Usk outstripped that at Frampton for the first time ever. I was especially surprised by the excellent sales of my book, ‘Flogging the Field’ (available on Amazon, all good book shops, divers petrol stations, various funeral directors and just one halal butcher in Leicester).

I could not work out what has changed about the Frampton show. The layout seems to have improved. The Aisle of Lost Souls (see GTN’s passim) is a matter for historians and the main shopping thoroughfares seem wider and more accommodating, but the crowd was more noticeably less ‘shooty’ and more ‘towny’. My sales on the day supported this observation with iPhone cases, key bells and soft pouches easily outselling cartridge belts and gunslips. Inquiries as to whether my cartridge bags were handbags usually tailed off when the price ticket of £200.00 was pointed to. The Cotswold Show at Cirencester underwent a similar change some years back and is now off my list. I hope that Frampton, with its great setting, lively arena and wonderful showcase for local food (although there were gaps here as well, I felt), re-asserts fully its bucolic credentials.