A late spell of difficult winter weather made it a difficult start to the year for many country pursuits, but Mandy of A&G Custom Gunsmiths, based in Newark, reveals she’s been extremely busy in the past few weeks. “We do mostly repair and custom work, and we’ve been rushed off our feet with repair work. We deal mainly with air rifles, but it’s quite across the board within that. It’s mostly leaks at this time of year, when people haven’t shot all winter and are getting their guns out again and need servicing before the season starts.”

Asked if that’s usual for this time of year, Mandy says, “It’s usually March and April that seems to be busiest, but this year it’s been April and May. We’ve put it down to the bad weather.” Is she expecting it to keep getting busier as the summer continues? “That’s the way it usually runs,” she says, “We get a lot of long-term shooters who would rather get their gun serviced than get a new one, but then we also have the gun club shooters who do tend to change their guns more often. Having said that, I’d say about 75 per cent of our customers are quarry shooters.”

Mandy adds, “We produce our own silencers and our own HW100 cylinder, which is a lightweight cylinder, and they’re going really well at the moment as well. They’ve picked up. A lot of people find out about that sort of thing on the internet and by word of mouth. There are a lot of forums out there with people on them who talk about this sort of thing.”

Further south, in Northampton, Mike of AR Hawkins explains that binoculars are the strongest seller in his range of optics by a long way. “We do well on Hawke and we do well on Zeiss. Scopes and monoculars are dead. Having said that, we sold a scope last week, but monoculars are very slow.”

He says binoculars sell well all year round, “Winter and summer doesn’t tend to make a lot of difference to us to be honest. I think we keep a big range of stock, probably more than anybody else in the country, which will probably help.”

If the sales on binoculars don’t change, I wonder whether Mike’s customers do.

“Not much,” he says. “We do very well with the estates in Scotland. We always have. We normally deal with the head keeper, and I know them all by first name, and they are always in need of binoculars.”

So it’s very much about the personal relationship? Mike explains, “Probably, but how it was established I don’t know! We also offer a repair service, so whatever’s gone wrong they send the binoculars to us and we can just repair it.”

Mike reckons that sort of service can be a big help in building the longevity of relationships like those he has with the keepers. “Whatever they want, we can do it, if they lose an eye cup or whatever, we can just put one in the post as we keep all sorts of parts and spares. If they send binoculars to us our turnaround is normally quite quick, so they’d only be without them for 7-10 days, which includes postage to and from Scotland.

“The only thing I think I’m going to add to the range, though I don’t know which ones to go for yet, is rucksacks. Even birdwatchers out for the day want a small rucksack.”

David, at Churchills of Dereham, is another retailer to report that things are looking good for business, with strong sales in a number of areas. “We’re doing very well with shotguns,” he reveals, “and as it’s now the sporting season the 30” sporters have been doing very well, and the brands which are very popular at the moment are – and this one surprised us – the Webley and Scott, which has been selling quite well, and Caesar Guerini.”

So, it looks like Churchills is getting shooters of all pockets, with something to offer for all budgets. “We are, yes,” David confirms, “The people that would usually have to look at getting a second-hand gun are actually able to spend their money on a brand-new gun for second-hand prices, which is actually very well made and which works very well. The other things that sell well are pre-charged pneumatic air rifles, and we tend to sell a lot of the Weihrauch HW100.

“The other thing that’s becoming increasingly popular are the new gas-ram series of air rifles from Gammo, they’re called IGT or inert gas technology, and they’re a gas-ram that actually works better than some of the PCPs. They start at under £170. The irony is, a lot of the people who have been coming in for some of the cheaper spring guns are those who have been shooting PCPs for a long time, and then want something a little more challenging.”

So, has anything else proved to be an unexpectedly good seller? David answers, “Rifle-wise, the popular ones are the CZ, and the new thumbhole has been popular. The most popular calibres are .22 and .17 HMR. In larger calibre rifles, the centrefire we’re doing best on is the new Howa 1500.”

Finally, I ask if there’s anything he is expecting to change about the sales patterns the shop is seeing as the summer gets going.

“The biggest change is probably in the winter time,” David says, “as the game shooting season means we sell a lot more game-orientated guns, the most popular of which would probably be a 20-bore Caesar Guerini. Now we’ll go into more sporting guns, for competition shooting, and the most popular would be a 12-gauge multi-choke sporter.” 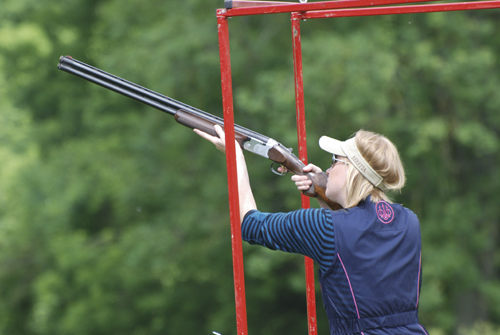 Up in Scotland at Glenluce Gunroom, I ask Stuart what has been selling well. He says, “I like to say everything. I would say that the guns have been good, ammo too. The only thing that’s slowed up a bit is clothing, and that’s all seasonal. But other than that, it’s been spot on. In this area we sell a lot of rifles, and most of what we sell will be Tikkas. They’re our main seller, mainly from the way they’re marketed, plus folk already have them, so people who are starting to shoot hear ‘buy a Tikka.’

“There’s a lot of stalkers and game shooters that come into the area at the weekends or that come up here for a week’s stalking. A lot of foreigners come here too, and a lot of wildfowlers come to visit as it’s a big wildfowling area, so come the back end you get a lot of goose shooters coming through. It’s the goose shooters that see us through I reckon, as the game shooting finishes on the first of February. That’s usually the quietest time of year, between game and stalking season, but these six weeks we’ve been flat out.

“There are a lot of game shooters who actually stalk as well, because once the game shooting finishes, apart from clay pigeons and maybe the odd bit of vermin control, there’s not really a lot else on for shooters in this area. They’re short seasons, so you tend to find that most folk will stalk as well.”

The shop has seen a rise in sales in another area: night vision. “We’re starting to see an increase in that in the last six months,” Stuart reveals, “It’s vermin controllers mostly, keepers and estates. I think there’s that many people lamping that a lot of the foxes are getting lamp shy, so they’re trying to get one step ahead again. I’ve sold a few night vision scopes and monoculars – not heaps, but I’ve sold the same amount in these last six months as we’ve sold since it started, so I can see a rise in that, definitely. You just need to keep your chin up and keep going.”