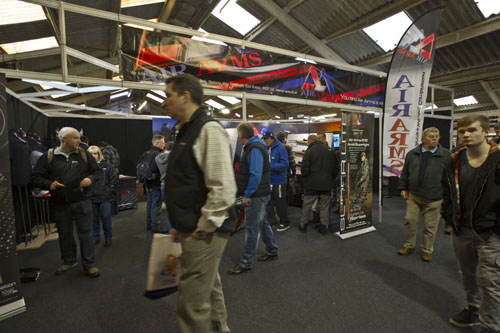 In the wake of the British Shooting Show and its first year at Stoneleigh Business Park in Warwickshire, Gun Trade News assistant editor Natalie Parker asks traders how they found the event and receives a wide range of responses

Bigger than ever thanks to its shift down to Warwickshire, the British Shooting Show was certainly busy this year and I was eager to speak to some of the exhibitors to see if this was reflected in the weekend’s takings.

Saturday’s traffic congestion at Stoneleigh Park seemed to be a concern among traders and visitors alike, but did it actually have an effect on trading?

George Bate Gunmakers of Stafford is first up, and it’s a positive story from them – they took almost a month’s profits over the two-day period. Dan Harvey comments: “It was fantastic – very busy. Saturday was great, sales were great.” I ask what their golden goose had been: “Shotguns mainly at the show, but we sold some airguns.”

Dan explains that it was the team’s first year at the British Shooting Show, and I ask if they were happy with the location: “Absolutely.” Now back from the event, Dan says that business is “steady, starting to pick up now,” with the shop selling “mainly Daystate airguns, a mix of .177s and .22s.”

Staying in the West Midlands, I ask Mike Hurney at The Shooting Party how he found the show: “Overall it was successful. Our takings were up on the previous year, which is always a good thing. I think the show suffered from its own success in some ways – clearly with only the one entrance to the site it caused visitors considerable problems. We heard many problems of long delays.”

Despite the traffic, Mike is a fan of the new site: “We still had a number of customers who had come from as far as Cumbria, but we also got people from Portsmouth who I don’t think we would have got if it had been at Newark. The general access is good because it’s just off the motorway network.

“In the first year here, it was never going to be easy. With some work the new venue will be better than Newark. They certainly did a good job in getting the punters there.”

But, Mike says, problems need to be addressed or it could affect next year’s turnout: “If they’re going to stay at Stoneleigh, they’re going to have to do some work on access, do work on parking, and do it early – start advertising now and say ‘We’ve learnt our lesson, please come back next year’ and they’re going to need to say that constantly throughout the year so that people aren’t put off.”

I ask whether there was anything that found particular favour with visitors. “Undoubtedly for us it was scopes and rangefinders. With a small stand there is always contention on what to display. It’s interesting that while our takings were up on last year, we didn’t sell a single rifle. Last year we sold a number of rifles. We were still able to increase our turnover without selling the more expensive items.”

He adds: “From an exhibitor’s point of view, the acid test is ‘Did people come and spend money?’ And they did, so you have to give the organisers 9/10 for that, but like all things there’s always room for improvement. Our takings were 60:40 in favour of Saturday which is like most shows.”

Like many retailers, The Shooting Party is having a quiet time of year, but events like the British Shooting Show and having an online shop boost trade. 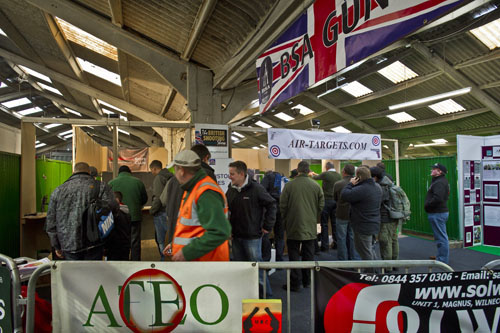 Slightly further afield, Marcus Simpson of John Bradshaw’s Gun Shop in Peterborough describes the show as “good.” I ask whether the footfall seemed higher than at Newark: “Not a great deal in it to be fair – though it was a different sort of customer.” I ask Marcus if anything was selling particularly well: “It was all across the board. We sell rifles, optics, ammunition, shotguns. We were happy with the intake.” And business in the shop itself? “Can’t complain – it’s ticking over.”

With the furthest distance to travel out of the traders I spoke to, Simon from North Yorkshire’s Gilsan Sports says it was worth the trip: “It was very good – we were very busy all the time.” Products in highest demand from Simon’s customers were “mainly guns and a bit of clothing.”

Gilsan Sports operates two shops, in Richmond and Leyburn, and I ask if visiting the show was worth taking time out from the shop floor: “We take 350 guns with us. Because we take so many guns it takes a lot of organising, a lot of sorting out. The shows are good but one of the shops has to be closed for a week because all the stock is at the show, so they have to be really good for us to do them.

“It’s still beneficial because every gun we sell down there is to a customer who’s not from our area. If we can keep 10 per cent of those customers, then over a period of time it creates extra business. We generally don’t make masses of money when we’re there but through the rest of the year the repeat business is good.” And this year’s show in particular? “We thought it was a good show, very well organised.

“Fantastic that there was internet there so we could use our computer systems, and being indoors. It was very similar to Newark but being based further north we see more of our regular customers [at Newark]”. Though too early to know for sure, Simon ends on a positive: “Money-wise we might be a little bit up [compared to last year]”.

Finally, leather craftsman and bag maker Phil Ogden of Ogden’s Shooting Supplies made the journey from Greater Manchester to Stoneleigh. He gives mixed feedback: “It was a bit higgledy-piggledy. It was a new venue. There were plenty of people there Saturday but I think the weather forecast killed it for Sunday. I took half on the Sunday that I did on the Saturday – they just weren’t there.”

How did the location compare to Newark? “The site itself, in my opinion, is not as good as Newark. Trade was up on last year, as it has been every year since I’ve done it, but I heard a lot of complaints about parking. In my opinion it should have been at the NEC. It was a good show, though.” On top of that, organisers have said they resolved any parking problems by the Sunday and there should be no issues next year.

Phil continues: “My leather products, particularly leather cartridge bags and gunslips, did well. All my high-end stuff sold, but on the cheap side of things I hardly sold any.” So it was a good weekend on the whole for Phil, but what about business in general?

“The shooting side of the business is doing well. People are confident buying my products because they’re British-made and customers can speak to me if there’s a problem.”