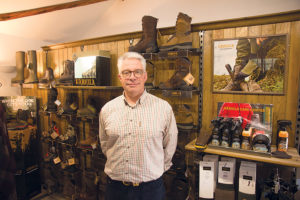 We meet up with Simon Esnouf at Seeland’s UK showroom and sales office. It’s his birthday. I might have felt guilty about making him work, but it quickly becomes obvious that he loves what he does. In his element, he alternates between sitting forward in his chair, engaged and alert, and leaping up to grab samples and examples from hither and thither – a new tweed pattern, a pair of wellingtons, a shooting vest, a knife. The showroom pretty much has one of everything that Seeland and Härkila does, or is thinking about doing, and it’s apparent that is considerably more lines of stock than I had previously thought.

Simon started work in the shooting clothes industry as an agent for Barbour in 1991. “It was a brilliant introduction to the fieldsports market,” he recalls. “When you’re working for a brand like that you have a lot of British history behind you. It gave me a lot of confidence.”

After a year’s career break travelling around the world, he decided to return to fieldsports context, this time eschewing the bustle of London for a country based job. He initially found employ with outdoor clothing brand Columbia Sportwear, and from there he moved into selling Seeland. That was 23 years ago. “I was very pleased to be in the right place at the right time to move back into the gun trade,” he tells me. “That’s my passion. My colleague Stewart was more into hiking, climbing and canoeing, so the gun trade wasn’t quite his forte. He left and it’s ended up with myself in the South and my colleague Ewen Steel who runs the North.”

“My proudest achievement is getting to a stage of business when I can have a showroom and do the job properly rather than having to run it out of the back of a van. It’s been a fantastic asset.”

The room certainly does look good. It’s already been an education to see everything on offer. I ask Simon what it’s been like as a sales tool. “Very good,” he says. “It’s a little under-used in the summer after the main buying period. But if anything it’s over-used in the winter when the buying’s happening. I’m hoping that now we’re handling our own PR we’ll ramp up the usage because it’s a great selling tool. People serve themselves. They want to have a look, have a rummage and that’s absolutely great. You don’t know what’s in someone’s mind. The customer who came in the other day and asked for some silly product? We’ve actually probably got that silly product somewhere.”

Before seeing the showroom, I’d thought of Seeland and Härkila as primarily clothing brands, but looking around at the showroom it’s clear that they’ve got a lot more to offer than that. I ask Simon if he thinks non-clothing lines are a growth area. “Absolutely,” he affirms. “And so do Seeland. Their accessory business was suitable for the Danish market until recently – inexpensive accessories specific to roebuck shooting. Whereas we can sell quite a lot of accessories, for instance pigeon shooting has a lot of bits you can buy, not just decoys and carousel, but also things that are too big to fit in the showroom like high seats. The Danes are now increasing the quality and the size of the range of accessories. That’s what the British want. Not just the cheapest one. Of course they want a reasonable price, but they also want it to be a reasonable quality. That’s very much the sort of thing that they’re producing now.”

So how does the relationship gel between an international manufacturer and the UK shooting market? “Inevitably there is a discussion – I was going to say conflict but that’s the wrong word. We work in different clusters. There are three separate clusters in Europe. We have a Scandanavian cluster: three or four countries that want one sort of thing. The German and East-European countries tend want something else. The British fall in with countries like France and Spain. You have to be sensitive to each market’s requirements. Our cluster is the biggest, so we have the biggest shout.”

I ask Simon how he sees the future for the trade relationship between Britain and Europe. “Ah, the good old Brexit question,” he says, wryly. “I suppose I have to be an optimist really. I’m working with a Danish company. They’re reasonably committed Europeans, although like us they retain their own currency, the Crown. Their attitude is more like the British than the French, Dutch or Germans who are fully committed to the European ideal. They’re slightly more reluctant. Like the Brits they’re a very proud nation, known for their design, technology and systems. They’re great people to work for because they’re organised. At any one time I know exactly where I am. The evolution of the brand is talked about in a very open way.

“I think the Danes will find a way to make this work. They’re a resilient, forthright Viking nation. They like to export, to sell themselves abroad, and they’re very business focused. Things won’t be totally without difficulties, but I’m sure they’ll find a way around it. I think there’s a definite appreciation of Scandinavian quality, if not always Scandinavian style. There will always be a market for that.

“I’m not a politician, and I don’t know what the guys at Westminster will come up with, but this is not designed just to poke people in the eye. Hopefully people will be a bit more grown up about it. We can all make money out of this. We need each other. Let’s make it work.”

Simon’s other major business relationship is with the bricks-and-mortar British retailers who sell his product to the end user. “The internet is fine,” he says. “It’s another string to the sales bow, but it’s not the only one. There are a number of ways of selling country and shooting clothing and I think the gun trade in particular is very reliant on the gun shop.

“We’re very strong on trying to develop the retail businesses. We don’t sell anything ourselves, unlike some other manufacturers. We only sell through retailers, most of whom have a premises of some sort as a part of their business. Sometimes it’s the main arm, others the retail is there as a smaller part.

“I don’t believe that retail is going to go away in this business. The consumer wants to go and look, and there’s nothing like having a product on your back.”

Simon believes in the power of his product to differentiate itself from its competitors in a shop environment. “If it’s not standing up to display in a shop, it’s certainly not going to stand up to hard use out in the field,” he says.

Of course, he has two distinct brands to sell. How does Seeland compare to Härkila when it comes to representation? “They used to be sold as one brand with two separate names,” says Simon. “But now we are becoming more popular we try and market the two separately. Some stores may be suitable for one brand, some for the other – it depends on the level of business and the type of products that they sell.

“We will be marketing the brands more and more separately as time goes on. If you look at the branding and the websites they’re very different. They appeal to different ends of the market, different tastes, and different functions as well. Seeland is more associated with a pheasant shooter, a beater. Whereas Härkila is more associated with a stalker and with working people using the kit harder. There’s a big difference between the end users.”

That core audience isn’t the only market Simon’s after going forward. “Taking the Seeland brand, it would be nice to appeal to a casual user, someone who’s main experience of the countryside is walking the dog. We’ve tended to sell to the pheasant shooting and syndicate market, people working on small shoots who are using them quite hard, and it works fine for lowland stalking. But it would be nice to appeal to an airgun shooters as well. We’re going to be spending some money advertising to an air rifle market with some products that we’ve got coming out this winter. Apart from just camo products – which are anecdotally what airgun shooters like – we’ll actually be showing them something different, modern and designed for rifle shooters.

“For Härkila however, the main thrust is still as a stalking brand. That’s something that we’re passionate about keeping. But the big new items are actually pheasant shooting products. A new tweed is coming up this winter that is absolutely lovely. People love the look of it. It’s got our new waterproofing system and I’m pleased to say that it seems it’s going to be very popular. The driven pheasant market in the UK is a very big market we’ve only scratched the surface of.”

I ask Simon if there are any other sneak previews he can provide. “We’re looking to redevelop two of our longstanding styles. We’re making a new version of our keeper jacket, which is a favourite that has been in the range as long as I have. That’s going to be lightweight, comfortable, quiet shooting jacket. It’s been a lynchpin of the brand for many years, so it’s exciting to see a new version. That’s about 18 months away.”

It seems like the Viking nation has only just begun its invasion.